Soul of paris is both a photographic tribute to Paris, Photographer’s adopted city, and a material trace dedicated to the community of more than a million subscribers who follow the publications on his Instagram account.

The 16 images that make it up allow a passage from the virtual to the real, from the fluid image to the photograph that one touches, from a luminous screen to an object to collect, to offer or to exhibit at home.
VuThéara Kham’s Paris is a footbridge that leads us back to the Paris of earlier photographers, such as Henri Cartier-Bresson, Brassaï, Frank Horvat, Robert Doisneau or Saul Leiter, Peter Cornelius or Robert Capa.
Limited edition, the first 100 copies are numbered from 1 to 100 and signed by the artist.

Since his presence on Instagram, Vuthéara Kham has published only one book (in 2013) that featured his images made on iPhone and published on the social platform.
Today, his phone is just a notebook that accompanies him on all his reports in France and abroad. And despite his success on Instagram, it was time for him to enter into a materiality specific to the printed image and to extract himself from the supremacy of mobile digital or the digital image that is shared.

Bringing his work to life could only begin by paying tribute to his adopted city.

He has therefore chosen with passion a selection of images where the Soul of Paris is revealed: a man immersed in his reading on the emblematic terrace of a Parisian brasserie, children in school uniforms sitting on a park bench, a man in an overcoat with a hat near the Arc-de-Triomphe, lovers in the setting sun wrapped in the architecture of Beaubourg, a waiter on a cigarette break, sitting on a row of Vélib’, an old lady with pigeons, couples hugging near Notre-Dame-de-Paris, tourists on the banks of the Seine, a Parisian woman strolling like a movie star, a cyclist on his way to the Opéra Garnier, an impressionist opera colored by raindrops, a game of soap bubbles with the Arcades of the Comédie Française as a background. ..

Photographic miscellanea, a touch of elegance and poetry, nostalgia, a dreamy Paris, fragments of a sublimated city? There is a bit of all this in the images of VuTheara Kham, and it feels good, in our ultra-connected universe, to soak up, by turning the pages of this unique portfolio, a bit of this perfume of Paris… 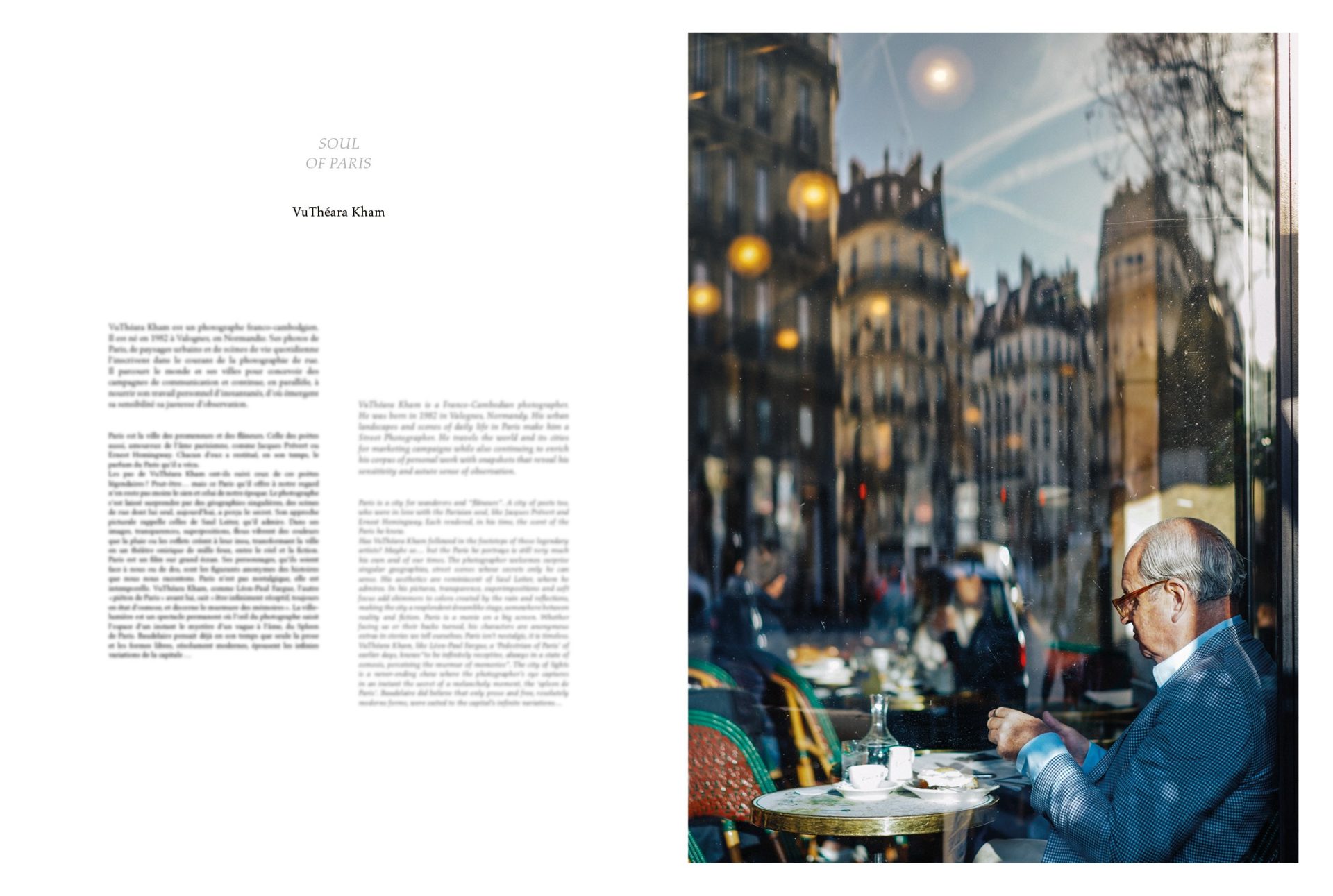 Back Cover
Paris is the city of walkers and strollers. Poets too, in love with the Parisian soul, like Jacques Prévert or Ernest Hemingway. Each of them restored, in his own time, the scent of the Paris he lived. Did Vuthéara’s footsteps follow those of these legendary poets? Perhaps… but this Paris that he offers to our eyes is nevertheless his and the Paris of our time. The photographer allowed himself to be surprised by singular geographies, street scenes of which only he, today, has perceived the secret.

Paris is then a film on the big screen and its characters, whether facing us or from behind, are the anonymous extras in the stories we tell ourselves.
Paris is not nostalgic, it is timeless. The City of Light is a permanent show where the eye of the photographer captures for a moment the mystery of a wave in the soul, of the Spleen of Paris: moreover, Baudelaire already thought in his time that only free forms, resolutely modern, marry the infinite variations of the capital…

VuThéara Kham was born in 1982 into a Cambodian family in Valognes (Normandy).

In 2011, he discovered Instagram and mobile photography. He never took a picture before he used the iPhone. This adopted Parisian then posts daily photographs of the capital, snapshots that very quickly attract 200,000 subscribers to his account, designed like a logbook, a newspaper with its slices of life. Instagram is for him a new territory of experimentation that offers maximum visibility, without intermediaries.

If this notoriety has enabled him to become a professional photographer since 2014, he hasn’t forgotten to continue to immortalize Paris and his signature has imposed itself: it testifies to his taste for the simple things, the natural.

His travels lead him to Iran, Cambodia, the United States, Vietnam, but Paris remains his anchor: with «Soul of Paris», it’s about fifteen photographs of the city-light that are honored, in large format, inside a single object.